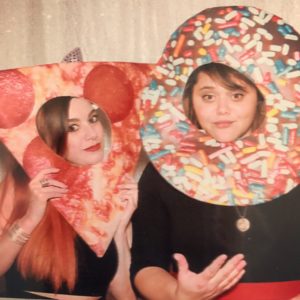 Amanda has a weakness for haunted houses, cosplay, movies made in the 90s, and anything with an element of camp – the aesthetic and also literal summer camp.

She has a master’s degree in English literature but filled her class schedule with as many film theory and gender studies courses as she possibly could. Her undergraduate thesis read F. Scott Fitzgerald through Laura Mulvey, and she surprisingly still likes The Great Gatsby. By day, she works in Marketing, but she’s also always writing or thinking about entertainment (follow her TV account on Instagram for her recommendations). By night, she runs the website and manages the social accounts around these parts.

Favorite horror movies: Scream (90s, duh), the Friday the 13th franchise, It Follows (which she saw for the first time for the pod), The Blair Witch Project and anything that takes place at a summer camp or a cabin in the woods.

Favorite rom-coms: Easily forgettable 90s rom-coms that actually offer up complex, flawed, unapologetic female characters – Forces of Nature, starring Sandy B, and Addicted to Love, starring rom-com staple Meg Ryan in an uncharacteristic turn. She also can’t look away from anything starring an early-aughts John Cusack – think Serendipity and Must Love Dogs. If you voluntarily watch rom-coms with her, prepare for snarky commentary. 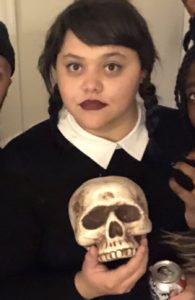 Brooke is a sucker for anything with a skull on it (bonus points if it’s kitschy). Psychological thrillers and the goriest of gore will have her standing up, nose-to-tv, yelling at the protagonist to “run!”

She’s fascinated by how different cultures grieve and celebrate death and is convinced that many Americans handle it by watching slasher films (or maybe this is just her own coping mechanism). What she lacks in formal film training, she makes up for with the sheer number of movies she’s seen and her detective-like ability to know exactly “who done it” within the first 15 minutes of any film. She also knows her way around a pun or two. Her day job is in marketing, but by night she enjoys board games, trying her hand at new recipes and camping (spooky stories around a crackling fire, obv).

Favorite horror movies:  Jaws (the first movie that made her say ahh!), The Ring (also kept her up at night as a kid), Misdommar (because who hasn’t already had that nightmare?), Hush, The Strangers (bonus points for Liv Tyler), The Conjuring and Poltergeist.

Favorite rom-coms: Forgetting Sarah Marshall (ridiculous and always a good time), How to Lose a Guy in 10 Days (she could watch it on repeat), Lady Bird (the coming-of-age story we all needed – plus Timothee Chalamet), Moonstruck (for an old fashioned New York love story – bonus points for Cher) and Practical Magic (for less com, more rom). Tara loves anything spooky, musical theatre and watching the classics. By day, she’s a Motion Graphics Designer with a passion for film – receiving fellowships with both the Jacob Burns Film Center and the Sundance Institute, where she had the opportunity to collaborate on the trailer for Sundance’s 2016 NEXT FEST. She’s also worked as a teaching artist for the Children’s Museum of Art, Antidote FX and the Jacob Burns Film Center and created graphics for the documentary series Foster Care Films, the band Trumpeter Swan and the American Management Association.

In her free time, she can be found jamming in her punk cover band Fall Out Girl.

Favorite horror movies: Bride of Frankenstein, Shaun of the Dead (any blend of horror and comedy. Or splatstick… if you will), Scream, Psycho, Dead Alive, Fright Night (the remake) and Little Shop of Horrors (the musical, but she’s not opposed to some Roger Corman).

Favorite rom-coms: Dirty Dancing, Clueless, Gentlemen Prefer Blondes, A Cinderella Story (and every single sequel including A Christmas Wish), Burlesque and Hairspray (Yes, she does love musicals…. why do you ask?)

The Happily Ever Slasher origin story

Amanda and Tara bonded over their love of horror and the fact that no one enjoys watching rom-coms with them because neither can take them completely seriously. Over drinks they realized that horror movies and rom-coms have WAY more in common than anyone gives them credit for. And, in a desperate need to share this important information with the world (and hear themselves talk), the podcast was born. When Tara chose to leave the podcast, Amanda decided to team up with her close friend (and voice of the Happily Ever Slasher theme song), Brooke. They lived together for 3 years before Amanda moved to New York and during that time watched approximately 4,789 horror movies.