This summer (or at least for the next 3 weeks), Happily Ever Slasher is going to camp! And, if we’re going to do this, there’s only one place to start. Ch ch ch ch ha ha ha. We’re talking about the 1980 iconic slasher FRIDAY THE 13TH and the 2001 camp comedy WET HOT AMERICAN SUMMER.

Who wears short shorts? Literally every person in the 80s and we’re here for it. While neither film is perfect, WET HOT AMERICAN SUMMER remains a completely absurd romp and FRIDAY THE 13TH is still iconic in the genre (although it’s neither of our favorites of the franchise).

Plus, we get nostalgic about our own summer camp experiences and, you know, spending extended amounts of time outside and around people. But Camp Crystal Lake can keep the Strip Monopoly. There are easier ways to sit around in your underwear for 6 hours.

Breakdown of the Friday the 13th legal battle. 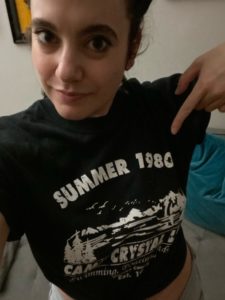